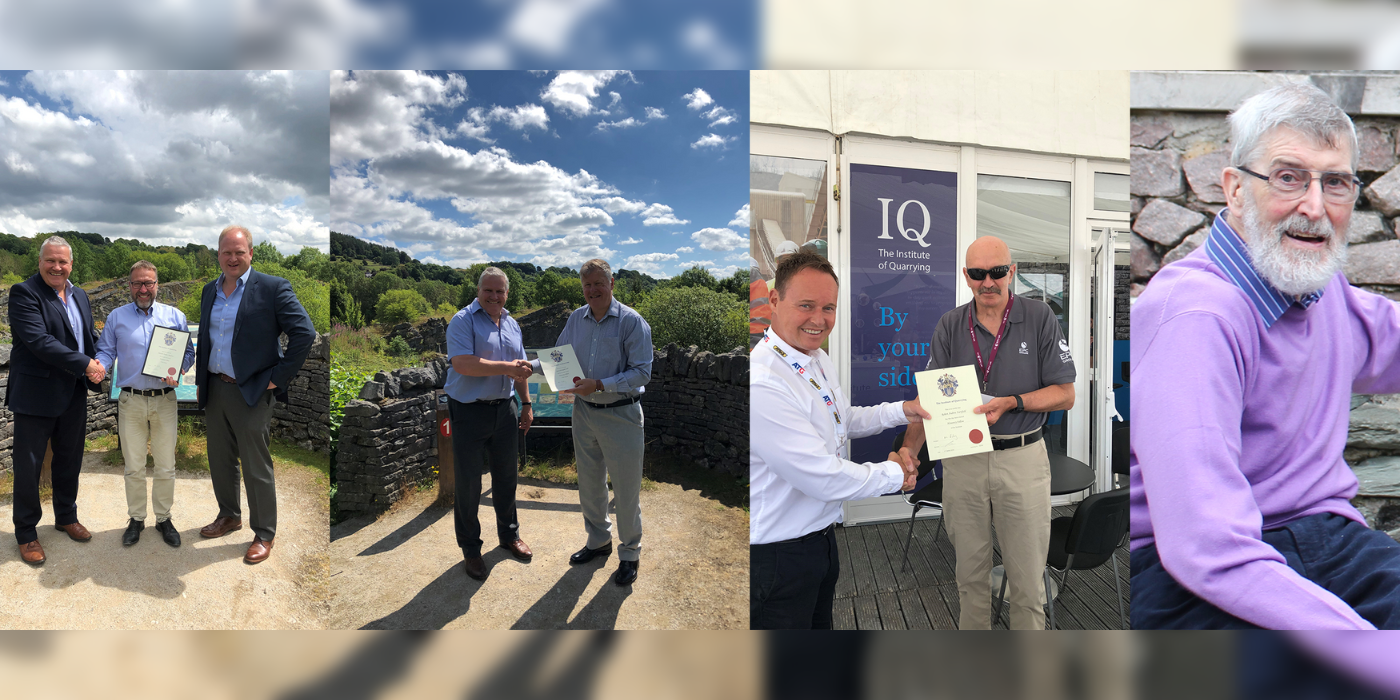 Four well-respected individuals have been awarded with Honorary Fellowships from the Institute of Quarrying (IQ) in recognition of their outstanding contribution to the quarrying and minerals extractives industries.

Martin Riley, IQ President says: “You’ll be hard pushed to find four more deserving recipients of IQ Honorary Fellow status. Rob, Andy and Paul are each recognised for their contribution to QNJAC working groups which have undoubtedly helped to make our sector safer, whilst Ian Thomas receives his Hon FIQ for his lifelong passion for geology and support of the sector as well as his vision in being one of the founders of the NSC. Congratulations to everyone from all at the IQ.”

Dr Rob Farnfield is stepping down as chair of the QNJAC Drilling and Blasting Group after more than ten years. Over that period the group has provided a wide range of guidance and materials to support improving the knowledge and implementation of a critical part of the industry. Rob’s passion and expertise with colleagues in the Group over such an extended period on behalf of the industry was exceptional in the opinion of the IQ Board.

Andy Meadows has been a long-term contributor to the IQ and the industry, in particular QNJAC. Most recently he led the development of the first self-audit tool established by a task and finish group on behalf of QNJAC on Site Energy Isolation. The tool represents the core guidance provided from QNJAC under the leadership of the Strategic Forum for Health and Safety in Mineral Products, supported by resources from the MPA and MPQC. Andy’s passion and commitment to developing the tool and then sharing with IQ members through webinars and IQ Branch meetings has been outstanding. Andy has been the point of contact for advice and support for those wanting to implement the tool.

Paul Joel steps back from the QNJAC Geotechnical, Faces and Stockpiles Group after more than 10 years as chair. The Group provides critical guidance and support in an important area of need for the sector. This includes roadshows to inform and engage IQ members through branch technical evenings, webinars and the development of a self-audit tool to support sites in developing a better understanding of the issues they need to address. Paul has been a passionate advocate during his time to share his knowledge and expertise to help deliver better outcomes.

Ian Thomas initiated the concept of the National Stone Centre in 1980 and was a founding member. He has been involved in the organisation for over 42 years and oversaw the NSC’s merger with the IQ in 2021. His energy and enthusiasm has driven the Centre forward and his Hon FIQ status follows hot on the heels of his receipt of the Geological Society’s Distinguished Service Award.

Honorary Fellowships are determined by the IQ Board of Trustees in recognition of very distinguished service, either to the Institute or to the quarrying industry.