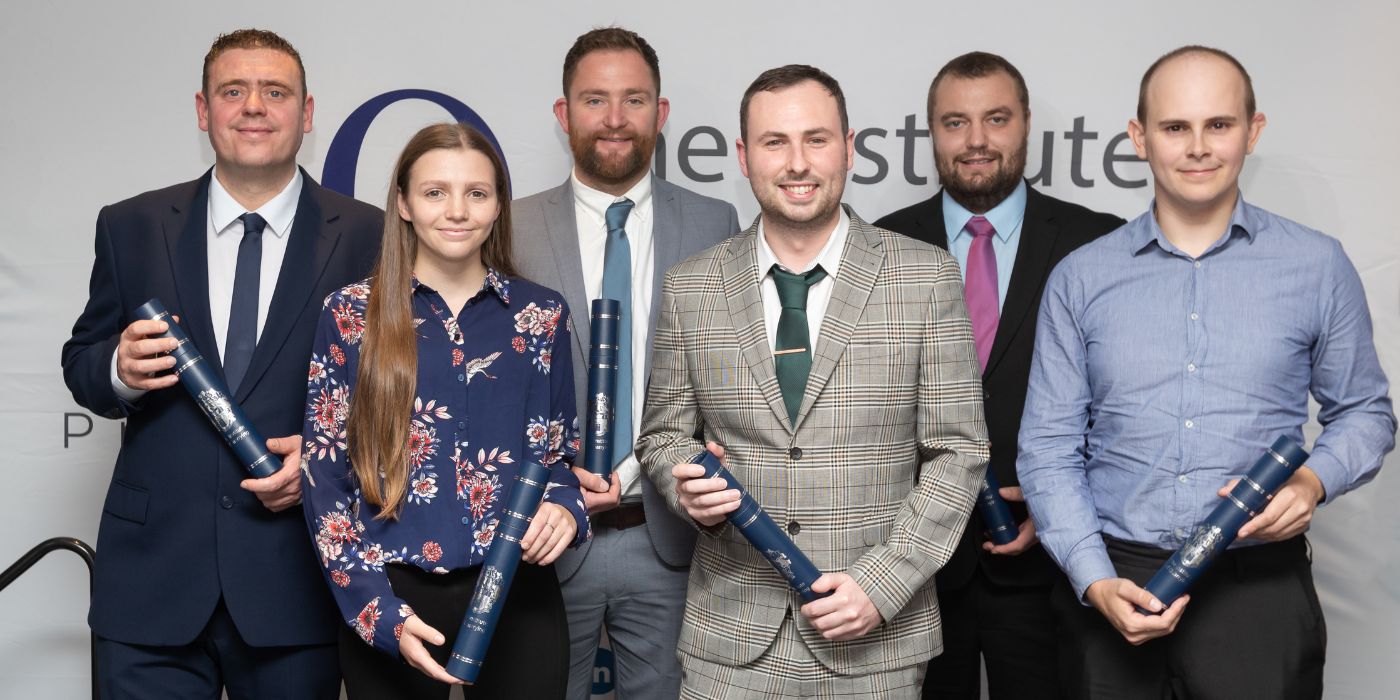 Set against the backdrop of the historic IET London: Savoy Place and in front of senior industry professionals, the Institute of Quarrying (IQ) and Institute of Asphalt Technology (IAT) have praised the high-performing students from the University of Derby Centre for Mineral Products at a joint awards ceremony.

The annual IQ & IAT Student Awards recognise those studying higher education at the University of Derby Centre for Mineral Products. Each award is a celebration of an individual's outstanding achievement and continuous commitment to the minerals industry.

Winners of the 2022 Student Awards accepted their prizes at the annual IQ Fellows Lunch in front of Fellows of the IQ and special guests. Viv Russell, IQ President, presented the mineral products students with their prizes alongside James Thorne, CEO of IQ. The asphalt students received their awards from Brian Downes, IAT President, accompanied by Lyle Andrew, Executive Director of IAT.

Among the winners was Lewis Coxon, Manager at CEMEX’s Hatfield Quarry in Hertfordshire, who is the first student ever to win an award three years running. In his first and second years, Lewis received Longcliffe Calcium Carbonates Awards of Excellence for being the best performer in class. This year, he won the Reginald W Coles Award (Best 3rd Year Foundation Degree Student Overall).

Viv Russell FIQ, IQ President, says: “It has been a great pleasure to once again jointly host the Student Awards with the Institute of Asphalt Technology, reinforcing our close, cross-sector relationship and supporting the development of talent in our industries. All of those that have received prizes have gone above and beyond to achieve exceptional results in their studies at the University of Derby Centre for Mineral Products.”

Brian Downes, IAT President, says: “On behalf of everyone at the Institute of Asphalt Technology, I’d like to congratulate all of the winners. We’re extremely proud of our partnership with the Institute of Quarrying and it was a pleasure to once again celebrate together the future leaders of our industries.”

Mark Osbaldeston is the Head of the Centre for Mineral Products at the University of Derby. He adds: “Congratulations to this year’s cohort of IQ and IAT Student Award winners. You have all demonstrated a true passion towards your studies and the industry, excelling academically despite the challenges faced as a result of the global pandemic over the past few years.”

Lewis Coxon, Quarry Manager at CEMEX, received the Reginald W Coles Prize, endowed in memory of past President of IQ, Mr R. W. Coles, for Best Overall Mineral Extractives Foundation Degree Student. He also received a £200 prize. Lewis has impressed tutors throughout his three years of studying, achieving top of his class for three consecutive years and receiving recognition with an IQ Student Award in 2020, 2021 and 2022. He graduated from the University of Derby Centre for Mineral Products with a Distinction.

Craig McCorquodale MIQ, Senior Technician at Tarmac, was presented with The Peter Preston Award, bestowed by the late Peter Preston, for Best UK Diploma Student, and a £200 prize. Being in a technical based role, Craig’s work ethic and dedication saw him achieve some of the highest marks ever seen from a non-operational student.

Two Longcliffe Calcium Carbonates Awards of Excellence were presented to the Best Performing Mineral Extractives Foundation Degree Students in Years One and Two.

Ben Clayton MIQ, Engineering Workshop Supervisor at Tarmac, impressed tutors with his hard work throughout his first year of study. Second year student Peter Triccas TMIQ, Deputy Quarry Manager at Aggregates Industries UK, has continued to impress tutors and maintain his high achieving standards. It is now the second time he has received the award. Both students also received a £200 prize.

Daniel McCann TMIQ, Assistant Quarry Manager for Pattersons Quarries, was crowned the winner of The Scottish Springbank Quaich Award for Best Third Year Foundation Degree Student and also received a £200 prize. It is awarded to the highest achieving student in Scotland, which is over the full three years of studying. Daniel graduated from the University of Derby Centre for Mineral Products with a very well-deserved Distinction.

The higher education qualifications, through the partnership with the Mineral Products Centre, are delivered by the University of Derby in partnership with IQ and IAT and go hand in hand with everyday operations in the mineral products industry.